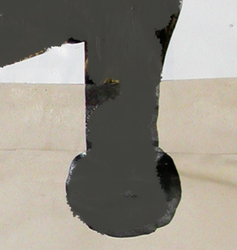 There was earth inside them, and
they dug.

Paul Celan, There Was Earth Inside Them


Shamanism has probably been a part of human culture for 30,000 years. Archeologist David Lewis-Williams and many others interpret a prone, bird-headed human figure painted in the Lascaux cave dated 17,000-15,000 BCE as a shaman in an ecstatic trance. The paleolithic human was no different than ourselves in body and mind but lived in a more dangerous, mysterious, and unpredictable world than the Western bourgeoisie, and where it was essential to access other dimensions of power to see and interact with spirits--- those intelligent, nonmaterial entities separate from the ego. Anthropologist Michael Harner writes that shamanism is a method for regaining your own spiritual authority, and not giving it up even to spirits; it is the freedom to know, not to believe.
Today, we have available an unprecedented quantity of information about the shamanic mind and transformative practices from living indigenous cultures worldwide. Then and now, male and female shamans were ritual specialists in their society. They recognized that our thoughts and emotions are a form of energy and when in harmony with a universal energy field, one becomes a clear channels for hidden information. By means of training that integrates the mental, emotional, and spiritual it becomes possible to see with the heart in order to learn, heal and help others.
The shamanic mind is a complex interweaving of non-ordinary mental states, visions and emotions which are deliberately evoked and left at will. Some psychological techniques for altering consciousness are light and deep trance, self-hypnosis, and dreams. Yoga and other spiritual traditions have their own technologies of attaining altered states, and there are others that include ingesting psychotropic drugs such as peyote. Professor of Psychiatry, Philosophy and Anthropology at the University of California Roger Walsh says that fully ninety per cent of the world's cultures have one or more institutionalized altered states of consciousness. Techniques of these ancient spiritual traditions contain seven common elements that are interwoven with these human values: living ethically, transforming emotions; redirecting motivation; training attention; refining awareness; cultivating wisdom; and serving others.
The indigenous view of life, through both ordinary and non-ordinary realities, maintains that the world and universe is alive, interconnected and interdependent----consonant with holistic views now establishing in the West. Up to about 2,000 years ago most northern and central Europeans lived similarly to Native American Indian peoples prior to Columbus---hunting, gathering, fishing, agriculture, living with spirits and shamans. The Roman conquest imposed their own government and religion, exterminating wizards, witches, and shamans or forcing them into hiding. Brooke Medicine Eagle, Nez Perce-Sioux, trained by Stands Near the Fire said,

Any of us can dream, but when you seek a vision, you do this not only for yourself
but that the people may live, that life might be better for all of us, not only for me but
for all people.
And,
The Indian people are the people of the heart. When the white man came to this land,
what he was to bring was the intellect, that analytic, intellectual way of being. Those
two were to come together to build the new age, in balance, not one or the other.


Today, fields such as physics, biology, earth sciences, ecology, feminism, and animal rights movements converge with the worldview of shamanism by the emphasis on the interconnection of all life, that we are part of a single, gigantic, planetary organism, that humans, animals, and plants are all part of the community. According to Native Americans traditions there are specific things to be learned from each bird, plant, and animal in a profound kinship with nature. This respect and inclusion in no way negates the fact that in nature, everything is eaten alive, and that She creates as well as destroys.
As an artist I hold values that are rooted in the Paleolithic and shamanic: the magic of animals, a power-vision from solitude, holding to the common good and the mythic-mind, looking in art for that which is free, spontaneous, intuitive, expressive, artless, raw, primal and archetypal, based in looking, seeing, feeling, and experiencing.