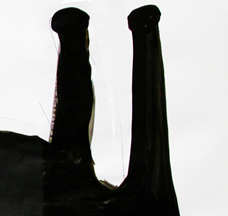 Totems, Masks, and the Primal Human

It became apparent to me that man is as full of gods as a sponge plunged into the open sky. Louis Aragon

From the beginning of my art making in the 1970s, I have questioned what art is and could be, as did Modernist artists. When they responded to the oppression of the new industrial conditions, some sought to offset its dehumanizing effects by investigating themes and forms found outside the Western European tradition, beginning with Gauguin (1848-1903). As this significant precedent proceeded, it opened new eyes to our own Western archaic past and to world indigenous art, which commanded attention by its inner necessity and intensity, a potential to uncover lost values, construct new meaning, and readjust hollowed out canons in Western art. My sculpture continues from this source.
The African and Oceanic collection of the Metropolitan Museum are some of my favorite places. What provokes me by indigenous art is freshness and originality of shapes and conception, soul, and archetypal themes that awaken the unconscious with its its deeper truths and potential to heal. In the 1950s Rothko spoke of archetypal images while Pollock, Rothko, and Still wanted to locate their discourse beyond current events, unbound by historical time, that went back to pre-literate, “primitive” tribal antiquity.
The totem is an indigenous form that I use, derived from the Ojibwa word meaning “he is a relative of mine.” with the implication of familial intimacy, respect, sharing and caring. American artist David Smith (1906-1965) brought to this subject geometric shapes of welded steel that emphasized his industrial vocabulary and technique. British sculptor Rebecca Warren (b. 1965) took an opposite tack with her numerous elongated, organically expressive vertical sculptures she termed Totems.
Another form important to my art is the mask which has retained its potential for expressive power from ritual origins in pre-history. In Picasso's Cubism both Iberian and African masks, associated with spirits, inspired his paintings and sculpture. Contemporary American Mark Grotjahn (b. 1968) has worked for over a decade with the mask form made from assemblages of cardboard and found objects, then cast in bronze and painted.
A third primary form in my art is the primal human. One of Picasso's bronze sculptures in this mode, Woman With a Lamp (1933), was so important to him that he chose it to preside over his burial site at Chateau de Vauvenargues, not the least because it functioned as a personal ex-voto. In the present time there are numerous sculptural representatives. George Baselitz carves the figure from wood with a chain saw and ax; Huma Bhabha is inspired by sinister monsters. For myself, the primal human is a deep level of the contemporary self that is inherently valuable because of its holistic nature, one where emotion, image, and form are braided into one.
Some early modern artists adopted some stylistic aspects from these objects, but others felt a more profound connection to them. Contemporary artists continue to use these old forms, many not to copy their style or disrespect their previous sacred context and the magical purpose of mediating hostile environmental forces. Rather, it is to find in them new meanings for our own time and place. Aboriginal sculptures had a spiritual necessity and intensity of feeling that speak across time and space. By their ancient use and current reuse these forms have become mythical, a profound and fluid structure accessible to a range of formal means.
Totems, masks, and primal humans in my own art are forms of spirits and gods that emerge from psyche, an inner and deep place where the things and events of life find meaning. Our science and materialistic cultural bias is scornful of inner life in general and dismisses the long history of such figures, yet they fulfill a need, creating a space for the supernatural and the otherwise unexplainable.
The figures call out for a new, expressive language that I construct by assemblages of paper, cardboard, and styrofoam. First, I prepare large laminated sheets of newspapers with rice paste, and afterwards when dry, shape them into hollow forms. Other components come from collaging cardboard boxes and styrofoam packing materials found in my apartment building's trash room. These materials arrive in the studio with distinct voices. The paper laminate shapes are wrinkled, bumpy, earthy, organic, and tactile. The styrofoam's previous job of protecting manufactured goods for shipping sports a large range of indentations, holes, cutout shapes, symbols, engraved and relief numbers, and buffering stripes. The cardboard is a natural material for geometric shapes and strength. These tenors merge into a unity by means of a thin final layer of paper coated with gesso and a single color of paint. In some cases I anchor a tall figure with cement in a galvanized pail.
This aesthetic combines industrial vocabulary with the organic, celebrating the power of nature while recognizing the facts of our constructed environment. Its process of making---- artless, free, and spontaneous---pays tribute to the complexity of contemporary experience.
The art I make surprises myself and I hope it surprises the viewer.